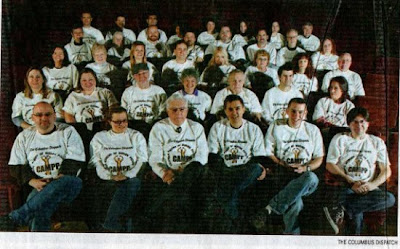 I'm a fan of Oscar hoopla. Yesterday (on Sunday), for the 4th year in a row, my name and picture were in the Columbus Dispatch to prove it. As a member of CAMPP (Columbus Academy of Motion Picture Pickers) I've seen all the nominated movies in the top categories and have given my take on who should win. My quote about Colin Firth was included.

This year there was not one particular movie that made me say to someone, "You have to see this movie." That's not exactly true. I did say that about The Messenger--- and The Hangover.

The other movie not to miss is The Road. I loved it. Alas, it was not even on the Oscar list. Sure it's a depressing movie, but oh, so poignant.

Last night my friends and I had a grand time at the Oscar Red Carpet Bash at the Drexel Theater. Two of us won trivia questions for prizes. As one of my friends said at the event, "It feels like being there" --meaning at the actual ceremony.

My favorite line from the award speeches was from the guy who told any kids watching at home, "Creativity is not a waste of time." Or something like that.

Photo: from the Columbus Dispatch. I'm the second row on the end (on the right)

My quote, in case you can't find it in the article:

"Firth embodied what happens to a person when quiet grief and dispair have nowhere to go."
Posted by hither and yon at 8:39 AM 2 comments: 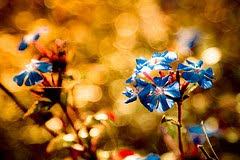 I imagine Huguette Clark will stay with me today as I go about my business. The daughter of William Andrews Clark, one of the Copper Kings of Butte, Montana, has an interesting tale.

There's something alluring about a recluse, particularly a rich one. Clark, unlike Howard Hughes, is not refusing to cut her fingernails or keeping her urine in jars. She just has not been seen for a long while. Plus, the properties she owns are over the top in elegance, are immaculate... and vacant. Each are for sale.

Ever since 1963, Huguette, who grew up wealthy and has stayed that way, has not been adding in many details to the thread of what she has been up to all these years. She's 103 years old, but no one hears from her except for her lawyer.

Reading about Huguette's past, her robber baron dad, and the properties connected with her, connected me with our family's trips to Montana and New Canaan, CT. William Clark started out panning for gold at Bannack in Montana. We were just there last summer swatting at mosquitos. I wrote about this former mining town, now ghost town for Gadling. To read, click here.

His former home is now a museum and bed and breakfast in Butte, Montana, another place I've been to and written about.

As for New Canaan, another location of Hugeutte's property, I have been to this town where the wealthiest people in the U.S. live and written about it as well.

Huegette Clark's story is one that alludes to nothing gold can stay, particularly for a person who doesn't seem interested in what gold can do.

A big thanks to Bill Dedman who was attracted to Huegette's story enough to write about her. His work has made my day more interesting. Clicking through the photos and Dedman's words on msnbc.com is story-telling at its finest.

Photo by harold.lloyd (won't somebody think of the bokeh?)
Posted by hither and yon at 11:49 AM No comments:

The third annual Women of the World Poetry Slam is coming to Columbus, Ohio. This means the best of the best women poets--72 in all from across the U.S. and a few from other countries--will be saying their piece at various venues throughout the city from March 10-13. The best who do the best will win prizes.

If you think you may have a poet in you, there are sessions for you to test your poetic mettle. From the event descriptions, it sounds as though there will be poetry to match anyone's tastes thoughout each day. Women who will be competing must have been a top contender in a poetry slam elsewhere.

The best 12 women will compete in the finals at the gorgeous Lincoln Theater.

Rose Smith, a wonderful woman and poet connected to the Pudding House in Central Ohio and a frequent contributor at the Monday night Poetry Forum at the Rumba Cafe, extoled the wonders of this must-see event. Rose is also one of the poets who is participating.

From what I can tell, the $50 pass that will get you into all venues, as well as, the party after the winners have been declared, is a deal.

For any information you need, here's the link to the Women of the World Poetry Slam website.
Posted by hither and yon at 10:19 PM No comments: