W﻿﻿﻿﻿﻿﻿﻿﻿﻿﻿﻿﻿﻿hen I'm quiet, I can hear the whir from the cables as I zipped from platform to platform at the Hocking Hills Canopy Tours. It's only been two days since this travel adventure found less than an hour south of Columbus.

Happily, my 19 year-old daughter and 10-year-old son were included in this outing as I gathered info for a travel article I'm writing this month. The first time I came here four years ago, I knew my kids would love it. They did.

Unlike the last time, when I was part of a press trip, this excursion was the chance to interact with folks who are not writers --a family of four celebrating the 16 year-old daughter's birthday and a couple who I assume are just dating. Let's just say they kissed every so often.

Like the first time I took this trip, the guides were terrific. Josh and Jake made sure that we were securly fastened each time we headed out from one tree to the next. Josh also pointed out the details of this slice of Hocking Hills and what was significant about each leg of our three-hour tour.
﻿﻿﻿﻿
﻿The zipline course covers ten ziplines and five bridges. The last time I traversed this course, the foliage was full. With  leaves just opening, this time, I enjoyed watching people zip by on other lines off in the distance. In a month or so, you won't be able to see them.

Although this was a freebie for us courtesy of Hocking Hills Canopy Tour, if you can swing the cost, go. For a family, this is a wonderful way to spend time with your kids.

My son was the youngest in our group. Age 10 is the youngest a child can be in order to do this zipline. There's no upper age limit. The oldest person so far has been 94.


The weight range is 75 pounds to 250.
For those with a tighter budget, consider the SuperZip. $50 will get you three trips on a high speed zipline--up to 50 miles per hour. One trip is $30.
Also, on Tuesdays, Wednesdays and Thursdays, kids ages 10-15 are half price with a paying adult--one kid per adult. To make a reservation, click here.
Posted by hither and yon at 12:07 AM 11 comments:

Yon: Rush is a rush every time 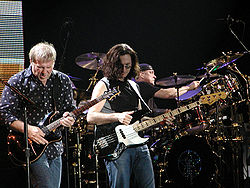 ﻿﻿﻿﻿﻿﻿﻿﻿﻿﻿﻿﻿﻿﻿﻿﻿﻿﻿﻿﻿﻿﻿﻿In 2004, the first time I pushed through the crowd of seasoned fans at a Rush concert at the Polaris Amphitheater, the now defunct outdoor concert venue at the outskirts of Columbus, Ohio, I had no idea what kind of music Rush played. I didn't care. I was there for the ride and to see one of my husband's childhood friends who has a dream job--if you can cook.

He's Rush's chef when the band is on tour. He's also one of those world travelers who seeks to do good where ever he goes. Like when the tsunami hit Sri Lanka years ago, our friend spent months there volunteering.

Seeing Rush perform was the icing of the night after our quick backstage visit to our friend's traveling kitchen.  We chatted while he bustled about gearing up for the band's after show eats.

Back in the audience, in the center of the eighth row, as I watched prop chickens cooking in rotisseries and laundry drying in a dryer on stage and thought, "This looks like fun." Yep, from the first note to the last, Rush was a blast of energy, music that offers zen-like moments and an invitation to climb aboard a communal experience. I loved it.
﻿﻿﻿﻿﻿﻿﻿
﻿﻿﻿﻿ ﻿﻿﻿﻿﻿﻿﻿﻿﻿﻿﻿﻿﻿﻿﻿﻿﻿﻿﻿Last April, our 4th Rush concert and one of the band's most significant of its Time Machine tour, the experience was like the first, but also like visiting with comfortable friends.

Because of the hoopla involved with filming the concert live--the Cleveland concert was the first full-length concert filmed and is now on DVD and Blue Ray as Time Machine 2011: Live in Cleveland, we didn't get to visit our friend back stage like we usually do. He did come out to see us during intermission for a quick hug and a great to see you.

While I spent to rest of the concert relishing the distinct sound of Geddy Lee's voice and the mesmerizing effect of Neil Peart's drumming aplomb, I thought about how our friend keeps them healthy and how I hope the band--and our friend-- keep traveling.

If you do go to a Rush concert, think of our friend. He's the guy who has set up his kitchen somewhere in the back with the mission to keep this band playing ever so fine.

*picture of Peart's view from Rush's website on the Tour Pics page. Click on the Cleveland, Ohio date for more.
Posted by hither and yon at 6:50 AM 4 comments:

Seasons of Yolanda: Tales of a Traveling Writer on Facebook

If there's any reason at all one needs to continue to write and travel, this is it. As I created this PowerPoint as a tribute to Yolanda Steiman, a friend and member of Company of Writers, a writers group I also belong to, I was struck by how much traveling and writing add depth and breadth to one's life. Also, what genius can be found in Facebook. All the text was culled from Yolanda's Facebook pages starting with the year before she died and ending with her last entry. Several of the photos were taken by her husband or Yolanda. Some were culled from Flickr.

You'll see one slide that has all the people who commented on Yolanda's Facebook pages during the year after she died. (She died last October.) My word, Yolanda, you sure touched a lot of people and brought the world together in an special way. Poland, Japan, Texas, Wisconsin, Michigan and Ohio--that's some of the world I enjoyed by savoring the flavors of your life. Thanks!
Posted by hither and yon at 8:31 AM 5 comments: