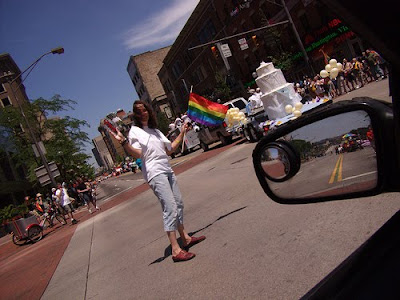 Each year, I go to the Gay Pride Parade to join in. Usually, I'm with the Human Rights Campaign. I love being one of the holders of the gigantic banner, particularly when we do a pinwheel--running in a circle in the middle of the street.

Yesterday, however, I couldn't find the Human Rights campaign, but I did find Greg Phelps, my generous friend who was in the parade with his art car, THAT CAR. It was great fun passing out Greg's postcards to parade watchers and waving a rainbow flag that I bought from a vendor.

If you have a chance to go to a pride parade, do. They are family friendly, joyful and welcoming. They even put up with those folks on the sidelines who hold up signs that say things like "You're going to hell." Interesting. During the entire parade, I felt like I was in heaven. 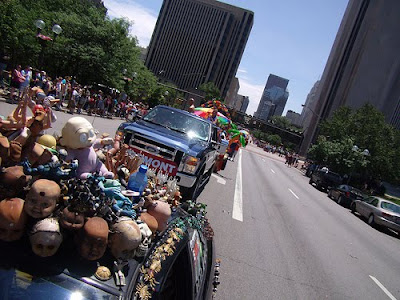 Posted by hither and yon at 9:25 AM No comments: